Its been a great amateur radio year for me and a year that has not only seen me get more involved with my hobby but one that has taught me a lot of new skills as well. If I add the completing of three things off my amateur radio bucket list Its been a pretty good year, and its not over yet.

I have recently read and heard from some fellow operators that the new mode of FT8 is the downfall of amateur radio and the same old comments that CW is now dead and done as a mode.

Had I been an outsider to the hobby I may have said that I agree with those comments but as amateur radio is my main hobby and I follow many groups and resources I think its fair to say that these remarks  on FT8 and CW are not correct at all.

Those of you who have read previous articles on this blog will know that while I am now a full licence operator the journey that I have been on has been one of great challenge and often frustration but it has all led to where I am now.

So CW has been a target of mine since I first became licenced in 2007 and now in 2018 I am  still making good progress towards that first CW qso. Now I know many operators who are doing the same thing and challenging themselves to learn something new,  We do it because we can.

So what's all the fuss about FT8 is it the death of amateur radio as we know it! or is it just another mode that has captured the attention of almost every radio amateur in the world. Being a huge fan of data modes and spending an awful lot of time on PSK and JT modes FT8 falls into my lap very nicely. Now I don't know if I am on my own here but I cannot get used to the automatic mode, I time manage my 15 seconds and manually move on to the next macro. Its just a fast and fun way to enjoy amateur radio and while it has its objectors I think its  mode that is here to stay.

Since becoming licenced back in 2007 I have read and seen many references to how good this show was, often compared to Dayton with many of our USA friends even suggesting that it may be equal or even better.
So with only one way to find out I had to go. With the assistance of my wife Julie M6TKI we planned a 5 day road trip from Portishead UK to Friedrichshafen, staying at an Airbnb very close to the centre and we had three fantastic days at the show. It was really as good as I had hoped and we met some wonderful people and talked a lot of amateur radio. I would definitely recommend going and I am sure that you will have a great time.
Its not an event that I would go to every year but we have certainly pencilled it in again for the 2020 show when we would like to take a trip on the Zeppelin while we are in the area, this looks amazing.

Number 2 on my Amateur radio bucket list was a visit to the biggest UK amateur radio show at Newark  the National hamfest , We planned to attend this show with a trip to Bletchley Park on the way home, so another Airbnb was booked and away we went. I had already purchased an antenna online from Nigel at M0VCO antennas  it was a HW 40 HP  and arranged for it to be collected at the show. This antenna has great reviews and should be just what I am after in my new qth. I will do a review on this once I get it installed and working. As always with Nigel the antenna was left for me as described and with no problems at all.
So how good was the Newark National Hamfest I think I may have been spoilt a little by Friedrichshafen because quite frankly it was a little bigger than some of the club rallies I go to but it wasn't great. Did I enjoy it? Yes I did enjoy it as I could talk radio with numerous people and I did get a few antenna related items that I was looking for and will I be going again? Probably not! but it was another item off my bucket list which was great.

What the visit to Newark did do was to set up a visit to the National Radio Centre at Bletchley Park the home of the codebreakers. The NRC was on my list not only to visit but to operate from as well if it was quiet enough to do so. 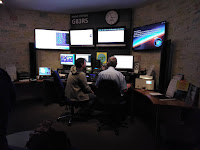 After looking around the Park which was all the better for it being a 1940s weekend we finally arrived at the NRC and we were immediately welcomed by the staff who were operating the station  GB3RS. After a short chat I was able to operate from GB3RS and that gave me my third item from my bucket list in only a few months.
Bletchley Park has to be on every operators list to visit, we had a really good day and met some really nice friendly people. One advantage for me was that as a RSGB member I was able to get free entry with a downloaded voucher. Although Julie had to pay full price that also entitled her to return for free for a whole year. So its a great day and a lot to see, you will enjoy this.

So that's it for October 2018 and its been a year so far that I could have only dreamed of a few years ago. Now we are looking to move to a new qth I have many Amateur Radio ideas that I look forward to attempting with the top of the list being CW.

Its 2017 and its been Amateur Radio FUN!

What a great first half of 2017 its been really busy in my world of amateur radio and I have been having a great time. Read on and I will tell you more.


It started getting good when in 2016 I applied to our local council for planning permission to install a vertical antenna on to the rear of our property. And guess what! they only went and approved it to the amazement of me and all of my friends and radio buddies. So I was on the hunt for a vertical antenna that would not break the bank but would get my signal out.


Now after reading a lot about how poor vertical antennas are I came across a review for a Moonraker GP2500 a solid and inexpensive performer. I like the sound of this but what got me more interested was the reviewers comments about the antenna not causing any problems for the immediate neighbours despite having a postage stamp garden.

This had to be worth a go and fitted the conditions of my planning consent perfectly. 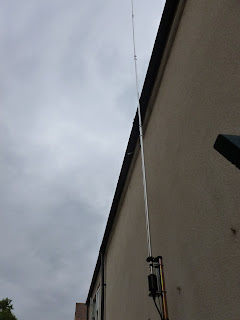 So here it is, up with a lot of help from my wife who was a fantastic help with anything above floor level!

So is it any good! If I judge it against all of the temporary antennas I have used from my qth over the last 10 years yes its really good if I was to compare it against a 60ft tower bla bla bla then its not going to win. Am I pleased with it, yes for the first time I can actually go into my shack and switch on
Posted by MW0GYY at 13:31 No comments: