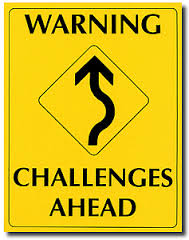 One of the results of 3 months in hospital was that my muscles suffered a lot of muscle wastage especially in my calves. I have been working out a lot in the past year or so as part of my physiotherapy and although I am walking again I still have weak muscles in my legs.

I think that this is part of the reason that I have not been able to start running again as I still don’t feel fully confident that my legs are working like they should be, they need some work!

It is a real goal to run again maybe not the 5/10K that I was doing before this incident but just to step off and run.

When I realised that I couldn’t walk during this illness it was a huge mental blow but I was determined that I would walk again and I did.
I reached a point in my recovery where I thought I can walk. In my mind it was easy, but in reality I just couldn’t take that first step.

That first step was probably one of the hardest things that I have ever done but once achieved it was all go and within 6/8 weeks with the aid of a walking stick and a few falls I was walking again.
Walking has become a real thrill and something that I will never take for granted.

Even though I suffered two serious brain traumas, after months of operations, treatment and therapy all seems fine in that department. So, my thought process is working fine but I still can’t run because I mentally cannot take that first step to start running!

It’s not because I am afraid of falling I have done that many times before, I know I can walk as I do this every day, so what is keeping this big wall up? 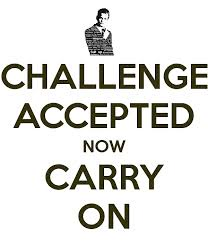 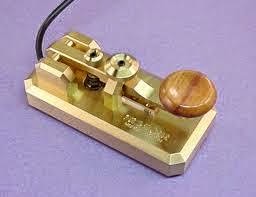 I still have a great interest in learning Morsecode its been a thought of mine to learn the code since becoming an Amateur Radio operator in 2007.

Even though I progressed through all the licence levels I still never managed to learn Morse Code.

Now I am really going to learn it! 2014 is the year that I will give it my best shot it’s another challenge that I want to complete and I look forward with great anticipation to the day I attempt to make my first QSO using CW.

I listen to a lot of music and I have always have music of some sort in my day so I am hoping that I have the ear to get to grips with this.

If I had started to learn this 20 years ago it probably would have been much easier but life is full of challenges.

The other snippet of advice I was given on numerous occasions is to never try sending until you are confident in receiving. Now that makes a lot of sense 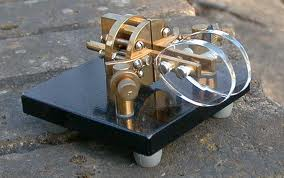 We have just returned from a great weeks trip to Exmoor having spent the week Geocaching and I played a lot of amateur radio operating portable from our caravan that we stayed in. Caravans make a really good /P operating base with all the comforts like hot water, heating and red wine. It was a great week and keeping to my physio recovery I walked the most I have done since leaving hospital last year so that was a real big positive for me.
On the radio front I had some really good contacts with my Kenwood 480 sat running 100W and a homemade 5meter vertical antenna! this got me all around Europe and even into Brazil on SSB, some great contacts on numerous bands. 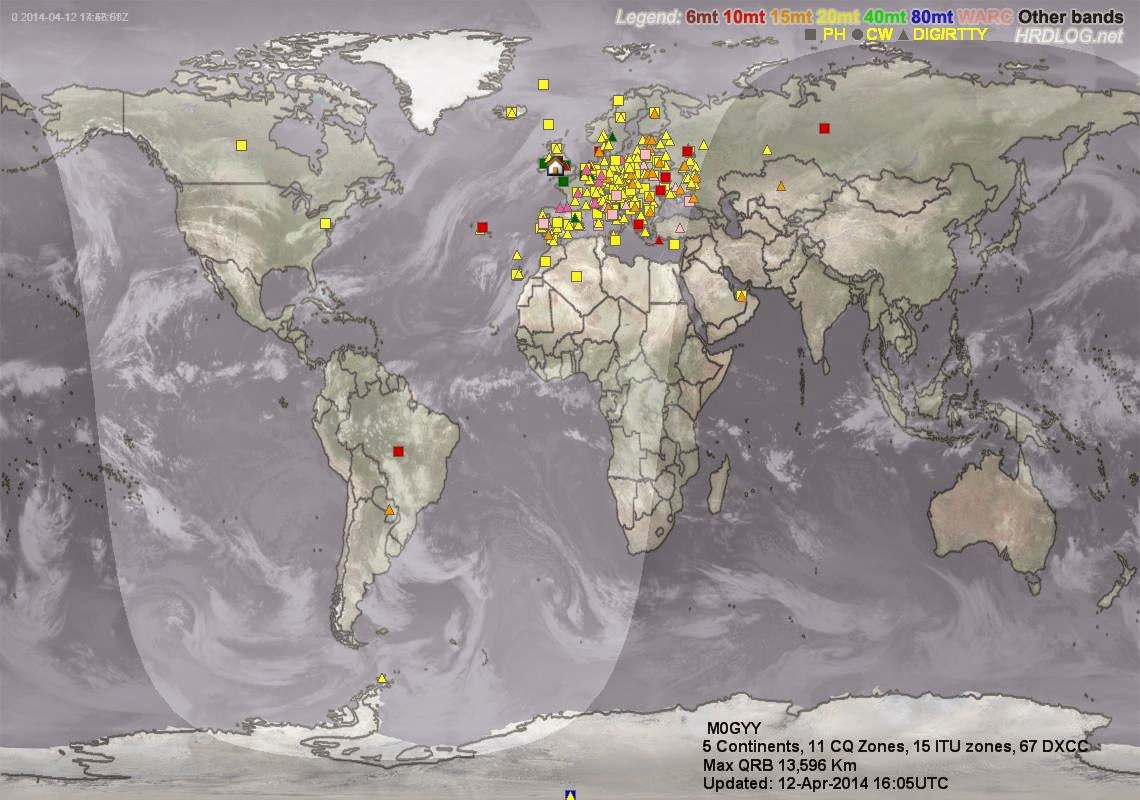 I had been lucky in finding good conditions on the 10 and 17 meter bands which along with 20 meter gave me good conditions for plenty of calls.
I am still trying to get my motivation going on morse code but I am finding it hard to get a positive start but I will keep trying as I am sure my contacts would double in numbers and distance without any real effort at all.

What I like about operating /P from Exmoor is the noise levels on the bands are very low almost zero on some bands it is a real treat to operate from here.Inbetween the HF operating I had the handheld radio listening to the local bands and its amazing to hear how active the bands are on some days, amateur radio is certainly well and active. 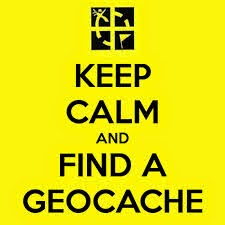 Geocaching is another of our favourite hobbies and its something that we have enjoyed all around the worldsince 2008 and it has taken us to many great places that we probably would have never seen or even heard of but we have found them with geocaching.
We have even done talks at clubs on how to start geocaching and we have brought many new members into the hobby. It is a great hobby for all types of people young and old and if your the outdoor type of person it really is a hobby for you or at the very least giving it a go. 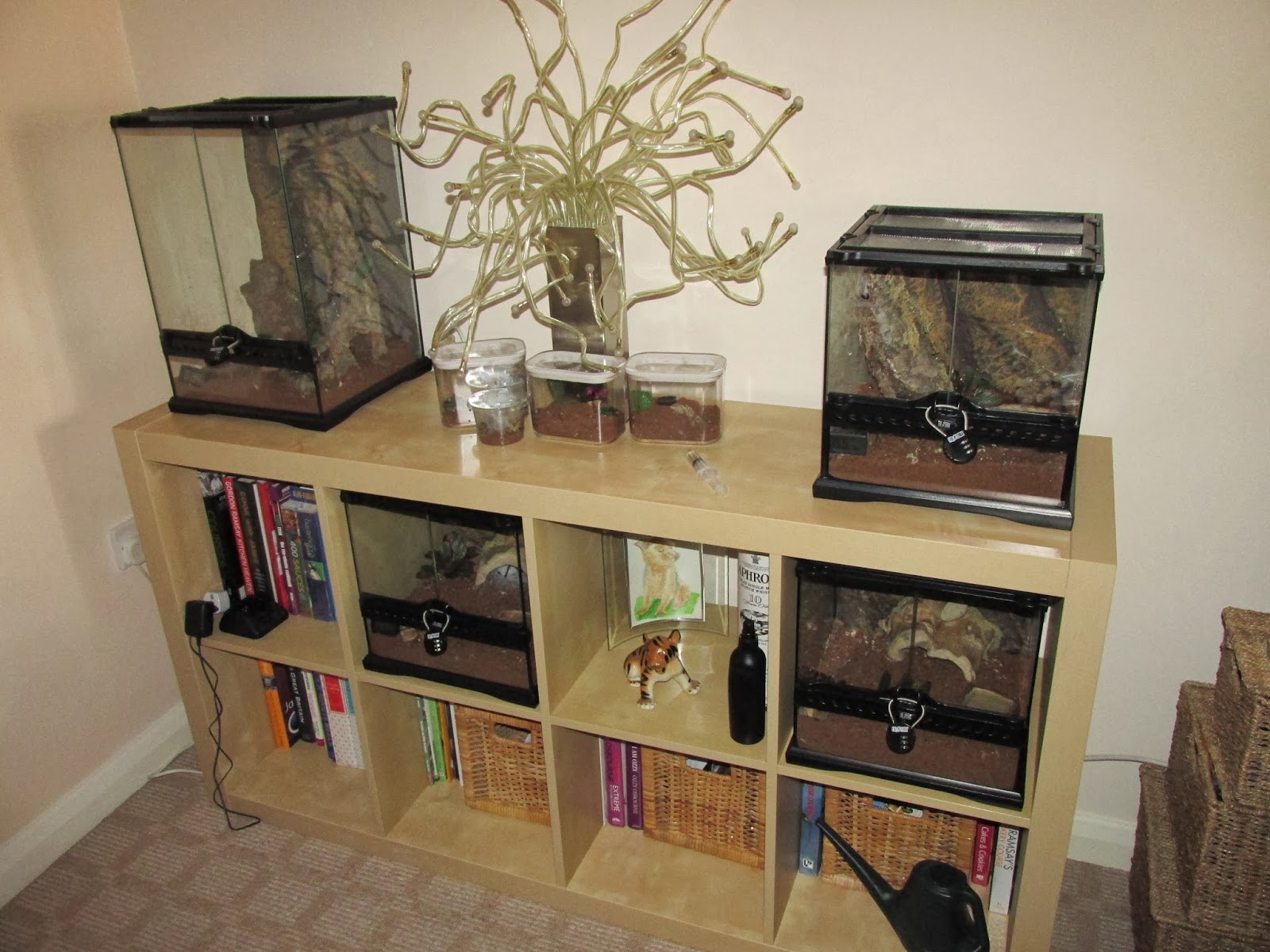 I always wanted a tarantula spider and for almost 30 years my wife was not happy about having one in the house.
In 2012 she happily agreed that I could have a tarantula as long as I made sure that it could not get out!
So I ordered my first tarantula from the Spider Shop and it was a Brachypelma Smithi juvenile. It was great setting up its housing and despite reading about tarantula keeping I did make one or two mistakes along the way but thats what learning is all about.


I was even more surprised to find out that most tarantulas that are bought online are shipped by post, and it was pretty cool unwrapping the new tarantula when it arrived. My intention was only to ever have one tarantula I have since found out that everone says that but its just not true or ever going to happen! My wife was really taken with the hobby and we went to the BTS show and we bought her an Avic Avic it was also a juvenile and has become a firm favourite with both of us. 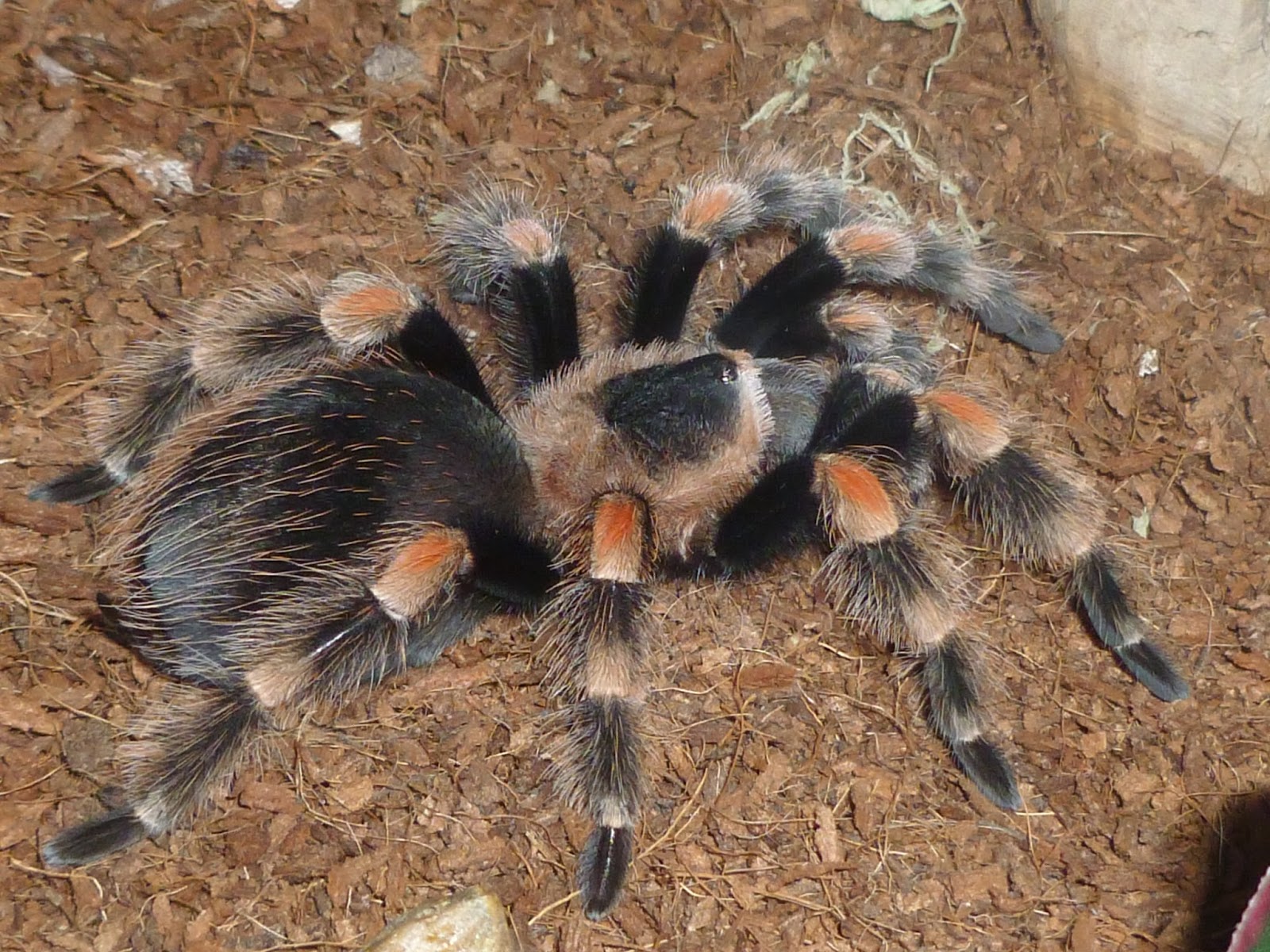 The picture on the right is my now much bigger B.Smithi and it was my first tarantula and even though it is much larger after having a couple of molts since it arrived it really does have the pet rock attitude it can go for days without moving and months without eating. In 2012 this spider blocked its cave entrance up and was not seen for over 2 months we kept its water topped up but it just never showed itself at all not even to eat or drink,

Another tarantula that we bought was a G.rosea this has been a great tarantula but again more often than not its another pet rock but this pet rock has attitude.
It is well documented that tarantulas can have a attitude adjustment when they molt they can go from placid to downright defensive/aggresive in a single molt. Our G.rosea is one of them, it will happily charge you if you try to top up its water dish and despite its pet rock attitude moves like a rocket when it wants to. 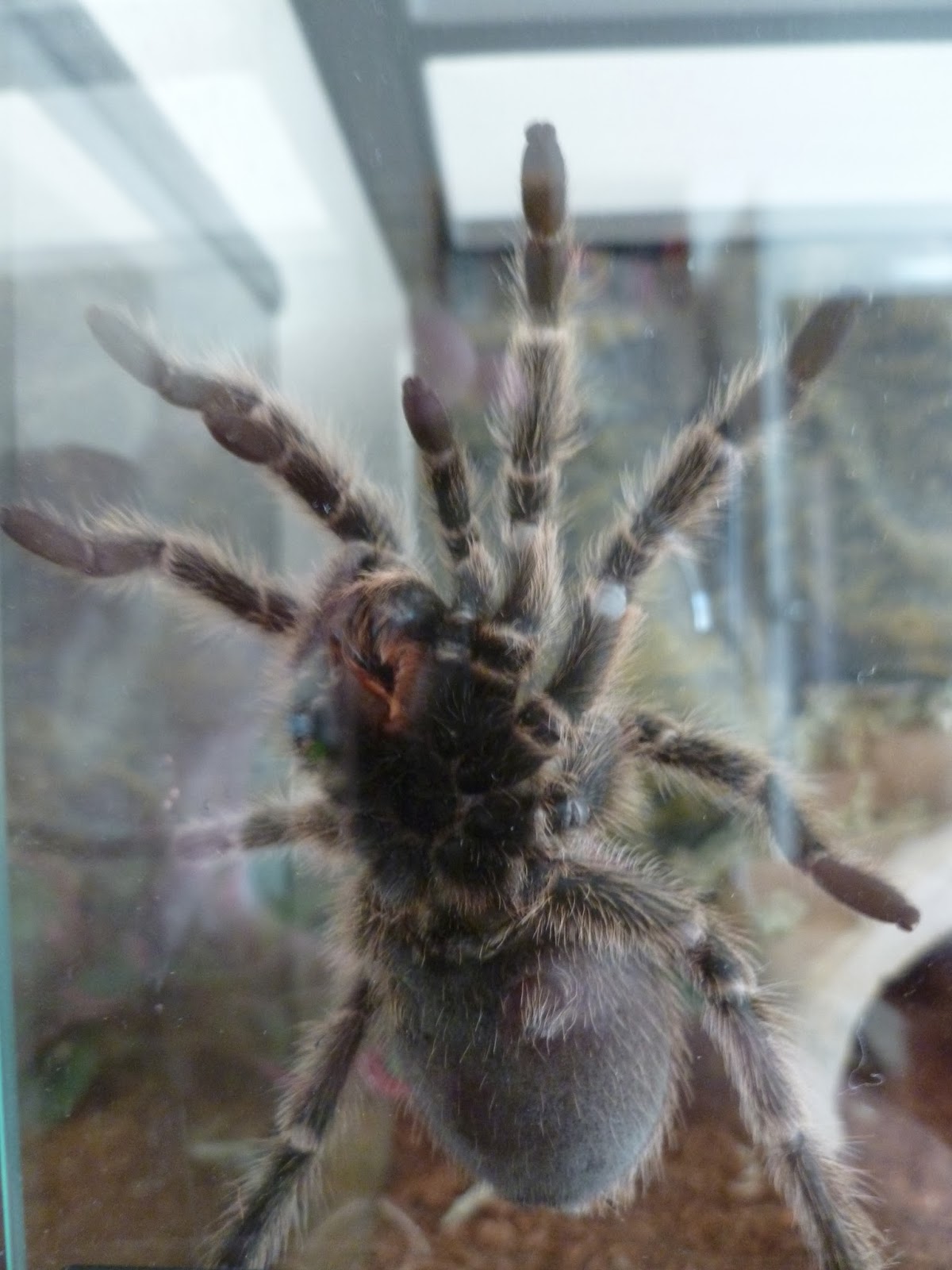 Something that we have been very keen on is not to get bitten/tagged by our tarantulas this has always been an important part of us keeping these amazing creatures. It is always prudent to remember that these tarantulas do and will bite if they choose to and as my wife is allergic to insect bites/stings we really cannot take any chances.
We also follow the BTS guidelines and we do not handle our spiders at all I just cannot see the need to do so. We are cautious when feeding/watering and our caution seems justified as up to now (touching wood) nothing has happened.

So at this point we had 3 tarantulas but of course that was not the end of it. How could it be with so many great tarantulas about just waiting for new homes!


Our next tarantula was one that I had been considering from the off but because I was new to this hobby and after reading up on this spider I knew that it was a bit more challenging than the ones we already had. This spider was often described as between a New World and an Old World tarantula! this to me meant that its bite was a lot more nasty than the ones I already have but also this Tarantula was fast and I can confirm this as this tarantula moves in a blink of an eye, out of interest our P.irminia is named BOLT a clear reference to its speed. Out of all of our tarantulas this is the one that in the blink of an eye destroys its pray in a frightening burst of aggresive speed and then with precision drags its prey into its bark tube to finish off the deed.

This has to be one of the most striking tarantulas in the hobby it really does look great.
This spider has earned extra respect from us as it is such a fast spider.

So now we are up to 4 tarantulas but it never stopped there, I became really keen on slings, even though the spiders I had up to now were nearly all juveniles I really wanted to try and raise tarantulas from slings and I have to say this has been a very enjoyable part of the hobby.
Its not been easy and we have had losses although very few but we are having sucess as well the P.irminia we have was brought on from a sling and now it is about 7 to 8 cm  diagonal leg to leg so its doing very well.

We also have an Avic amazonica sling that is doing well and an Avic versicolour which at the moment is our smallest sling but it has just molted this week and is coming on well.
To round off our collection of tarantulas we have two of the most amazing tarantulas that you can have they are said to have a great attitude and grow to a nice size these are Brachypelma albopilosum or as commonly known curly hair tarantula. These two slings are like little tonka toys they
burrow like crazy and they trundle over anything that gets in the way.We have had great fun watching these two and our other slings grow. Only from personal experience will I say that it is better to buy slings and grow them on, you will get a lot of enjoyment from doing it this way and you will also learn a lot about the tarantulas you keep.
Read the books and listen to advice and you will not go to far wrong.